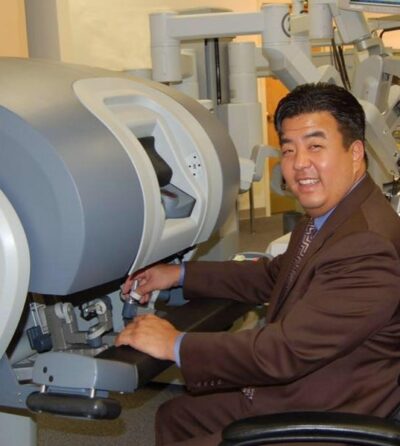 Rick A. Low, M.D., FACS was born and raised in Honolulu, Hawaii. Dr. Low received his MD from Johns Hopkins University School of Medicine and completed his residency in general surgery at Cedars-Sinai Medical Center in Beverly Hills, CA. He has been in practice in Arizona since 2000.

Dr. Low has always been on the leading edge of surgical technology beginning with single incision laparoscopic surgery in 2006 and continuing into robotics. In 2008, he pursued intensive training in robotic surgery and quickly established himself as a “key opinion leader” in robotic general surgery. His motto, “Faster, Safer, Better, Cheaper” as it applies to robotics as compared to laparoscopic surgery was highly influential in helping to dispel early skepticism surrounding robotic surgery. He has performed well over 1,000 robotic operations to date and was among the first in the U.S. to perform single-site cholecystectomy, ventral hernia repair and component separation. He has proctored over 400 of his surgeon colleagues and has assisted with the development of several hundred robotic programs nationwide. Dr. Low has lectured to thousands of surgeons internationally on the value and importance of computer-assisted surgery to improve patient outcomes, expand surgical repertoire and optimize the cost effectiveness of surgical interventions.

With the advent of the triple aim of the Affordable Care Act, Dr. Low saw opportunity where many saw a paradox. Dr. Low is also the Medical Director and Senior Vice President at CAVA Robotics, an industry leader in robotic program optimization and improvement. In that role, he consults for hospitals and IDN’s across the country to improve the financial and clinical performance of their surgical interventions using “big data” in healthcare to reveal opportunities for improvement and to guide administrative decision making.

Dr. Low is happily married to his wife, Sophia and together they have 5 children. He credits his wonderful wife and beloved children as his greatest and most cherished supporters and most influential motivation for his success.